This next tune in the continuing series of Pipe Tunes of the First World War is “Festubert.” This slow march commemorates the Battle of Festubert, part of a larger action in France during May of 1915.

By spring of 1915, fighting on the Western Front had stalled to trench warfare. Both the Central Powers and Allied forces had spent the past few months strengthening their lines and planning for action in the spring. The front lines on the Western Front stretched for hundreds of miles. As a result of the various battles several salients had formed.

A salient is, essentially, a bulge in lines where some units had advanced and captured ground ahead of their other units. A salient gives one side a foothold in enemy territory that could be used to support an advance or take part in a flank attack. On the other hand the troops in a salient face attacks on three sides.

In May, there were two main salients that saw action. The first was the Ypres salient. Held by the Allied Forces it projected into a region around the city of Ypres, which was considered strategically important by both sides.

The second was near Artois in northern France. Here German forces held a salient that extended from Reims to Amiens. This bulge, if it could be expanded by the Germans,  threatened the Allies' lines of communication from Paris to northern France.

The French forces developed a plan that would continue a series of operations on other parts of the front in an effort to cut the German supply lines. If a successful assault could be made against the Artios salient, the Allied forces could push east to capture vital rail lines used by the Germans. The French planned to launch a series of attacks on the center of the salient.

Working in conjunction with the French, British and Commonwealth forces planned an assault on the left side of the French forces, to the north. The plan called for the Allies to capture a group of ridges. These ridges, while not very high, provided good views across the relatively flat countryside.

On May 9, 1915 after 6 days of continuous shelling, the French started a series of actions designed to capture Vimy Ridge. At the same time, the British launched attacks to capture Aubers Ridge. The British plan called for a fast attack, with unlimited objectives, after a short heavy bombardment.

The British attack failed miserably. A lack of high explosive shells, which were needed to cut through the barbwire, stalled the advances. The British artillery was in poor condition in general due to heavy use. They also had problems with their rifles and ammunition caused by quality control issued during manufacturing. The British failed to capture any ground and failed to support the French assaults to the south.

In an effort the support the French, the British planned another assault, this time in Festubert, a small French town south of Neuve Chapelle. This time the British used the French system of attack, which involved a slow, heavy artillery bombardment followed by an infantry assault. The Battle of Festubert is considered a continuation of the Battle of Aubers Ridge.

The same issues that plagued the British during Aubers Ridge continued during Festubert. The infantry assault was proceeded by a 60-hour artillery attack. Four hundred artillery pieces fired over 100,000 shells but the lack of high explore shells resulted in little damage to the German lines. The infantry assault started on May 15, 1915.

The initial assault was carried out by members of the 2nd and 7th divisions of British infantry and were mostly made up of Indian troops. This assault saw a modest gain of territory. By May 19, these two division had to be withdrawn due to heavy casualties.

The attack was renewed by the 1st Canadian Division and the 51st Highland division. May 19 saw heavy rain and the attacks stalled. Both sides spent the day digging new trenches and brining up more troops. The attack began again on the 20th and the battle ended on May 25, 1915. At the end of the battle, the British forces had captured the town of Festubert but had only gained about three kilometers of territory.

The Battle of Festubert is considered to be won by the Germans. The British gained modest territory but suffered over 16,000 casualties. The Germans only had about 5,000 casualties, including 800 men taken prisoner. 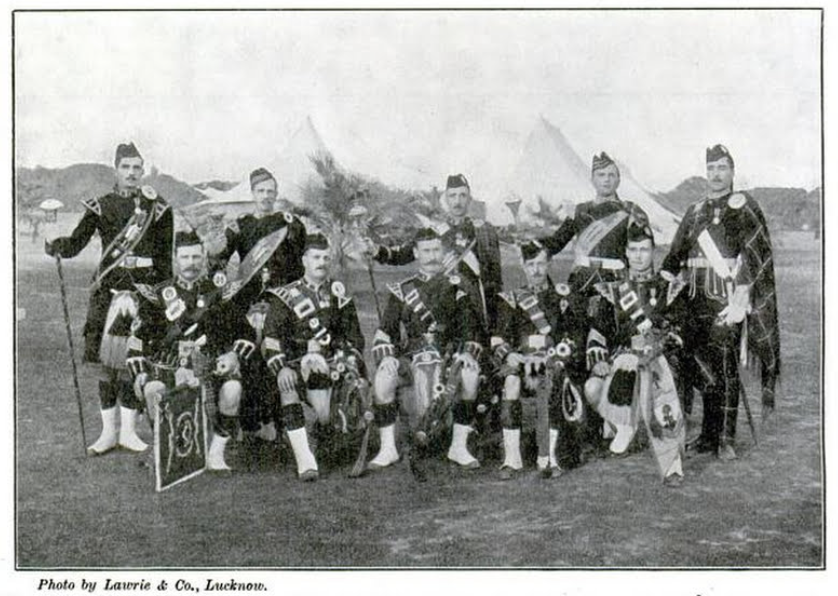 This photo, with Pipe Major Sutherland seated on lower right, was taken in 1914 during a gathering of the Highland Brigade in Agra India.

Not much information can be found about Pipe Major Sutherland. He survived the war, that much is known. No other published tunes could be found under his name, although the records of the Highland Light Infantry were notoriously poor with many of them being lost.

0
0   0
previous 6 Hidden Reasons Your Embellishments May Sound Like... Well... Sloppy Joes
next Ear Protection for the Bagpiper, Part 1

The Battle of the Somme