During the later part of the 1800’s there was a belief among many bagpipers that Piobaireachd, or classical bagpipe music, was close to being lost. One of the music's greatest supporters, and one of the founding members of the Piobaireachd Society, was Major-General C.S. Thomason. He spent much of his life studying, collecting, and finally publishing a major work on piobaireachd, Ceol Mor. 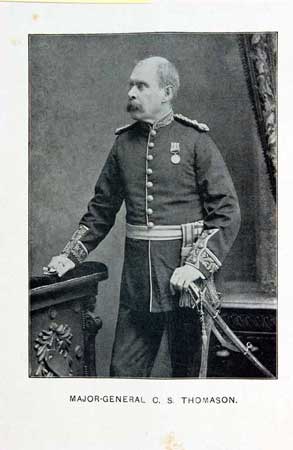 Photo of Major-General C.S. Thomason from the National Museums of Scotland

Major-General Charles Thomason was born in India, on the Ganges Plain, in 1833, and spent much of his life in India. He came from a family devoted to Indian service. Three generations on both sides of his family were in the Indian Service.

In 1839, when he was six years old, his family returned to England. His mother was sick and seeking treatment in London. She died shortly thereafter and he was sent to live with his grandparents in the West Elchies, in the north-east of Scotland.

Thomason stayed in Scotland and England until he was about 21. He attended various schools training for Indian Service. It was during this time that he started to learn to play the pipes. His first instruction coming from “Mackie” the gardener. In 1852 he was working with Alexander MacLennan, who he called his “First master in piobaireachd playing.” He was never considered a great bagpiper but he had a passion for the instrument and its music.

Thomason was commissioned in the Royal Engineers in 1852 and served his whole career in India. He was involved in the Indian Mutiny of 1857. He escaped Delhi hidden in a cart and returned later as part of the force to retake the city. He was also a map maker and his maps helped the British retake the city. He was active in the construction on many of the canals and defenses the British used in India.

His passion was piobaireachd and he spent much of his life collecting tunes and manuscripts. He lost his collection during the Mutiny and spent the rest of his life rebuilding this collection. He was a self-taught scholar and he came up with a system of notation and abbreviations that allowed him to quickly transcribe tunes. He spent a lot of time studying the format of piobaireachd compositions and standardized the layout of the tunes.

His biggest contribution to piobaireachd was his book Ceol Mor. This book was initially self published. It was first released in three small volumes from his home in India. Part I was released in 1893 with Part III released in 1897.

In 1896 he returned to London after retiring as a Major-General from the army. It was around this time that he started work on a full, combined, volume of his work. The first edition was released in 1900 and contained a total of 277 works. Because of his system of notation he was able to fit one tune per page which allowed the book to be much smaller that previous works. The last update to this book was done in 1905.

After the publication of his book, Major-General Thomason went on to do work on the pipe chanter scale. He collected and compared many chanters, from ancient to “modern” ones. He compared the frequencies of the different notes of the scales and published his findings in letters to the Oban Times. It is interesting to note that at this time A was standardized around 439 Hz but with variations from 411 to 452 Hz.

There was a good deal of discord caused by the publication of his book and he fell out of favor with the piping community. After some controversy in the Piobaireachd Society, he stepped down as President after a very short term. However in 1909, a few years before his death, Major-General Thomason was issued an Address.

This “Address to Major-General CS Thomason” was signed by over 800 individuals, including the Countess of Sutherland. This address showed the undersigned's “…deep appreciation of and to tender our sincere thanks for the great work which you have accomplished in the interest of pipers and the music of the great Highland pipe.”