In this part of the ongoing series on bagpipe tunes of the First World War we are going to discuss “Major MacRae’s Farewell to the 72nd Highlanders.” This celebrates the great Brevet-Major John MacRae, D.S.O. of the 1st Battalion Seaforth Highlanders.

It should be said at the start that due to the lack of records on many of the tunes of the First World War, the background behind these tunes is, at best, an educated guess. The history provided is essentially the proof of the guess.

John MacRae was born around 1877. He enlisted in the Seaforth Highlanders in 1893 when he was just 16. He served in the South African Wars, where he was mentioned in the dispatches for gallantry and he won the Kings and Queens medals. In 1914, he was commissioned a lieutenant and sent to join the the 1st Battalion in India as the quartermaster.

The second half of 1915 saw a series of actions in the Middle East between the Ottomans and the British. In late 1914 the Indian Expeditionary Force was sent to the region to secure the flow of oil. As 1915 progressed the role of the force expanded in an attempt to build prestige in the region by defeating the Ottomans.

The 1st Battalion Seaforth Highlanders were sent to Mesopotamia in the fall of 1915 to fight against the Ottoman Empire. The Battalions first action in Mesopotamia was in the Battle of Sheik Sa’ad.

In December 1915 the 6th Poona Division of the IEF, after winning a battle against the Ottomans, was forced to retreat to the city of Kut south of Baghdad on the banks of the Tigris River. The Ottomans soon surrounded and laid siege to the city.

The Meerut Division was sent to try and break the siege. On January 6, 1916 the Division started to advance up river towards Kut. In an attempt to halt the advance, a force of the Ottoman Empire proceeded downriver from Kut. The two armies met at Sheik Sa’ad. The Ottomans arrived at Sheik Sa’ad first and set up rudimentary defenses on either side of the river. The British forces attacked on both sides of the river at the same time.

The 1st Seaforth took an active role in the fighting. At one point every senior officer of the battalion was killed or wounded, Captain MacRae took command of the battalion. For his gallantry he was awarded the Distinguished Service Order (D.S.O.) The fighting lasted for two days. The British were able to defeat the Ottomans but a lack of resources stalled the advance.

The Division took part in the First Battle of Kut, an attempt to break the siege. During the battle Capitan MacRae was wounded in the chest and right lung. His injuries were so severe that he was invalided to England to recover. At this time he was made a Brevet-Major.

“Major MacRae’s Farewell to the 72nd Highlanders” was written by Pipe Major J. MacKenzie of the 1st Seafoth Highlanders. MacKenzie would have served with Brevet-Major MacRae in France and the Middle East. MacKenzie was mentioned in a dispatch for gallantry during the battalions time in Palestine, after MacRae left.

Major MacRae joined the 1st Battalion in 1893, only 12 years after the merger of the 72nd and 78th regiments. At the time there would have been members of the old 72nd Regiment still serving. The composer of the tune, Pipe Major MacKenzie, was the Pipe Major of the 1st Battalion Seaforth Highlanders. The best guess of the title is that is a throwback to the former regiment. 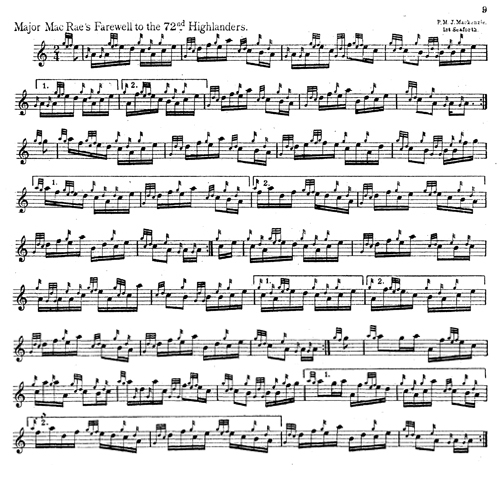