Fed Up With Bad Strike-Ins and Attacks? 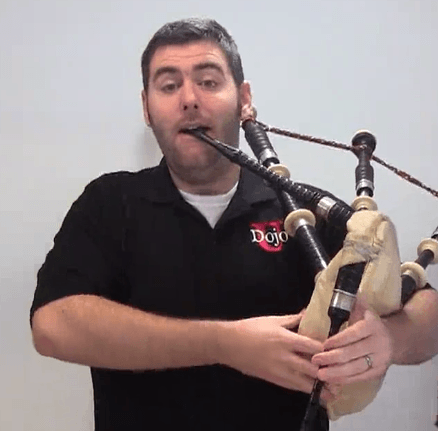 Are you sick of practicing week in and week out, but still struggling with your pipe band attacks?

It doesn’t matter if you’re a grade 5 band or a grade 1 band - it’s painfully clear that a great attack means more now than it ever did. And, even if you don’t compete - it’s embarrassing (as it should be) when the group can’t get their instruments up in unison.

And this is no small issue…

It’s this a clinical scientific study? No. But it’s the bottom line - bands with bad attacks almost never win contests.

Is it possible to win without a great attack? Yes, but generally that will mean that every single other aspect of a band’s performance is disproportionately better than the competition.

And speaking of disproportions — the band’s attack (you know, that 3 second window when the band strikes in) is worth so much more than what happens during the rest of the performance, that we just can’t afford to ignore it.

As I was developing our “S.T.A.R” Strike-In Success Plan (more on this in just a moment), I spent a lot of time asking judges - “Why do we (as judges) put so much weight on the strike in.” Here were some of the common reasons:

Now do you see why Attacks are so important to your performances?

And, at the end of the day, this is a good thing!!

Put yourself on the other side of the story for a moment: If you are the band with the great attack, and the competition had a poor attack - don’t you feel like you should be rewarded for this? Of course!

Isn’t a great attack a super-satisfying musical moment in pipe band music? Yes, of course it is!

The problem is, at least for the moment, that your attacks aren’t good. They are letting you down. For whatever reason, this is the bane of your existence. Trust me - I’ve been there.

What on Earth can be done to remedy this problem? Good attacks can’t just be a matter of luck if you’re going to get serious about winning competitions… or even just competing at competitions.

When I was Pipe Major of the Oran Mor Pipe Band, the group had just been upgraded to Grade 1, and inconsistent strike-ins were an issue to say the least. How would the band ever make the Grade 1 final at the Worlds (which we would eventually do, in 2011) if we couldn’t even be sure that we could all get our pipes to start at the same time?

Rather than panic, I got to work…

In addition to spending a lot of time as a group working on attacks, we also began implementing what would become the “S.T.A.R” system for guaranteeing good attacks. Yep - that’s right. There had to be a way to totally irradiate bad attacks… we just had to figure it out.

When we (the pipe corps leadership) were finished, we were left with a simple, easy to follow (and to remember) 4-pronged system outlining the principles of the fail-proof attack. The four prongs were: Setup, Technique, Air-pressure, and Rhythm.

Each prong had a couple of key elements that needed to be practiced and engrained - but now that we had this system in place, it was just a matter of time before we no longer had to worry about having good attacks - we just had to maintain and practice them.

Indeed, we were no longer scared of bad attacks - we were just practicing to see how great we could make them.

If this were true in your band - how much of a relief would that be? How much more competitive would you be?

For a long time, this was just internal information for Oran Mor and for the other bands I taught, but now we’ve decided to “open-source” this information. After all, it’s going to be up to you to execute on this plan - the ideas themselves aren’t that profound (although they are profoundly organized).

Here’s a sampling of what’s covered in this plan…

Personally, I wouldn’t attempt competing as a band without a fail-safe plan for having a great attack, and this is especially true if you’re the pipe major or leader of a group.

Don’t Play Another Contest Without Experiencing This Plan

Have you ever heard the expression: “Pioneers get scalped but settlers prosper?”

At Dojo University, we’ve already done all the hard work, made all the mistakes and figured out what works (and what doesn’t). And believe me, we’ve made some mistakes (gotten “scalped”) a few times along the way…

…and we do this stuff for a living!!

That’s why we’re so careful to document WHAT WORKS into simple, easy-to-follow success plans so everyone in the Dojo Universe can duplicate these results across wherever they are in the world, or whatever “level” they’re at.

In the past these Success Plans were mine alone, but now I’m making a select few available to the public. (You’ll see why in just a bit.)

So now you don’t have to go it alone!

Normally I’d sell these Success Plans for $47 - $97 (and this particular plan is probably at the higher end of that spectrum!), but for a very limited time I’ll let you have instant access to this plan for just $7.

Literally, you can have one of those fancy coffees at Starbucks (Lord knows I love my Starbucks!) or you can:

The choice is yours…

Click the “Add To Cart” button and start recording in professional-quality in no time at all .... by simply digesting the material in our Success Plan…

…a Success Plan is more like a “checklist on steroids!”

Here's how it works:

In the last 36 months my team and I have:

…all through our own, internal bagpiping endeavors.

And along the way we have perfected a large number of strategies and tactics. More importantly, like any good scientists, we DOCUMENT each strategy in step-by-step “Execution Plans” so our best ideas could be repeated and rolled out across all of our different students, bands, and other “clients.”

They’re all meat and no fluff. If you want backstory and theory, go read an article somewhere. Success Plans are all about taking action and getting results as quickly and easily as possible.

If you’re thinking “$7 is cheap…what’s the catch?” then here are three reasons that should put your mind at ease:

We also believe that once you experience this Success Plan, you’ll want more and maybe…just maybe…you’ll come back, buy more and possibly even upgrade to a Dojo U Premium Membership where you get access to our complete Success Plan Library.

No fine print…no “hidden trials”…no shenanigans. Just the information you need and the results you want.

Is there a guarantee?

Yep…all our trainings have a 30-day, no-questions-asked guarantee.

In other words, if you aren’t happy for any reason, just let us know and we’ll give you your money back. We obviously don’t think it’ll come to that, but if you’re even the least bit worried if this will work for you, then put your mind at ease. You either get the results you want or you get your money back. It’s as simple as that!

How long will it take to get access to this guide?

Your login and access information will be sent to the email address you provide, and there will be a video on the next page that explains how you can access the guide inside of our Execution Plan Library.