Daily Dose - Warm Up With A Crossing Noise Detector

In 1915, the 1st Battalion Seaforth Highlanders had been sent to the middle east counter Ottoman control of the region.“Major MacRae’s Farewell,” most likely, commemorates the popular officer, Brevet-Major MacRae, as he was forced to leave the Battalion in Mesopotamia after being severely wounded during the early part of the campaign.

In 1916, after the First Battle for Kut, where Major MacRea had been wounded, where the British forces were repulsed and a garrison of over 8,000 soldiers had to surrender, the British government sent a new military commander in the region. Lieutenant General Stanley Maude was given the task of restoring British prestige in the region.

The majority of the British forces in the region were Indian troops. There were a few British battalions in the region, mainly battalions that had been stationed in India at the start of the war. Many of the India troops were sent to the region with little training although there were a number of veterans from the western front.

General Stanley spent most of 1916 training his troops and building the military infrastructure in the area. He built a railroad from the coast to Basra. He had to advance up both sides of the Tigris River so he acquired a number of armed river boats and supply ships. By December of 1916 he felt that his 50,000 troops were ready.

The advance on Baghdad, and the Ottomans, started on December 13, 1916. The time spent training paid off.

Moving systematically up both sides of the river the British forces fought a series of battles. In February 1917 the British Forces, including the Seaforth Highlanders returned to Kut and successfully took the city. Unfortunately, the Ottoman forces were able to escape toward Baghdad. The British pursued them until February 27, 1917 when the paused to rebuilt their supplies.

On March 5, 1917 the advance on Baghdad resumed. They caught up with the Ottman forces at the junction of the Tigris and Diyala Rivers, 35 miles south of Bagdad. After several unsuccessful assaults from the south, General Stanley sent some of his forces to try and flank the Ottomans and advance on Baghdad. The Ottomans shifted the bulk of their forces to match the British, leaving one regiment to hold the river.

The British launched a surprise assault on the remaining regiment on March 10, 1917. This sudden attack shattered the Ottoman defenders and created a path to Baghdad. The Ottoman forces, unnerved by the sudden British victory, retreated to the city. Panic ensued and on March 11, 1917 the British Forces captured Baghdad without a fight.

The Seaforth Highlanders spent most of the rest of 1917 in Baghdad. In December 1917 they were sent to Egypt to prepare for the Palestine Campaign.

“The 1st Battalion (72nd) Seaforth Highlanders Entry into Baghdad, March 1917” was composed by Capitan Ian Hamilton Mackay Scobie. It was first published in Pipes of War in 1920. 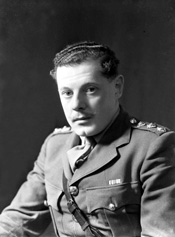 Captain MacKay Scobie served in the 1st Battalion Seaforth Highlanders during the First World War. He was a bagpiper, but not a member of the Battalion Band. He retired as a Major and after the war he published several books including “Pipers and Pipe Music in a Highland Regiment” and “An Old Highland Fencible Corps.” He also was the founder of the Scottish National Naval and Military Museum in Edinburgh Castle, which is now known as the Scottish National War Museum.