In this continuing series of article on tunes of WWI we will be talking about the tune “The Highland Heroes of Mons” written by Pipe Major Robert Meldrum. The tune commemorates the first battle of the British Expeditionary Force in the First World War, the Battle of Mons.

The  Battle of Mons was a subsidiary action of the Battle of the Frontiers, the first major action on the western front of the First World War. It was considered a tactical win for the British, a loss for the French, and a strategic win for the Germans.

The First World War started on the 28th of June, 1914 with the assassination of Archduke Franz Ferdinand of Austria. This set off a an international crisis of tangled international alliances that led to Austria-Hungary declaring war on Russia on the 28th of July, 1914. Germany soon declared war on Russia. This resulted in France mobilizing for war with Germany due to alliances with Russia, and bitterness over losses in other wars. Germany declared war on France on August 3, 1914.

On the 4th of August, 1914, Germany invaded Belgium and Luxembourg. This would give Germany the ability to invade France from the north. This violated Belgiums neutrality in the war causing the United Kingdom to declare war on Germany the same day.

At the time, the United Kingdom had the most well trained army in Europe. It also had the smallest, with the British Expeditionary Force (BEF) numbering around 80,000 men. When compared to the million man army that both France and Germany had they seemed insignificant.

The United Kingdom had not fought a war in continental Europe since the end of the Crimean War in 1856. Many countries, including Germany, dismissed the British army. This caused them to underestimate their military skill. The British soldiers specialized in rapid fire of their Lee-Enfield rifle. A magazine fed, bolt action rifle. They could hit a man sized target 15 times in 1 minute.

By the 22nd of August the BEF arrived in Mons. They took up a position on the left side of the French army which was heavily engaged with the Germany army near the French-Belgium border. The first British contact with the Germans actually came on the 21st of August when a reconnaissance encountered German forces in Obourg a town just outside Mons.

The British forces set up defensive positions on a canal that ran through Mons. The Mons-Conde canal had an oxbow just outside on Mons that was included in the British defenses. This created a salient position that was less than ideal for defense.

On the morning of August 23rd, 1914 the Germans attacked the British line starting with a artillery bombardment at dawn. At 9:00 am German infantry launched their first attack. The attack was focused on four bridges in the salient. This attack was repelled with heavy losses by the Germans.

A second assault by the Germans proved more successful. As the Germans were successfully assaulting the salient another force launched an attack on the rest of the British defensive line.

Greatly outnumbered, in some cases 3 to 1 by the Germans, the British were forced to retreat. Germans were able to force a crossing of the canal to the right of the British lines and were threatening their right flank. At 3:00 pm the British forces pulled back from the salient to secondary defensive line.

The evening of 23rd of August saw the French army on the British right started to retreat. This further exposed the British right flank placing them in an indefensible position. At 2:00 am on the 24th of August, the British were forced to retreat again. This became the start of a larger retreat that stretched over two weeks and 250 miles finally ending just outside of Paris.

The British forces proved their strength against the larger German army. The retreat forced the British to fight many rearguard battles with the Germans. They were able to hold the Germans back for almost 48 hours. They also repelled the German assaults against the retreating army.

The British Expeditionary Force had several Highland Battalions. These included battalions of the Highland Light Infantry, the Black Watch, Cameron Highlanders, Argyll and Sutherland Highlanders, and the Gordon Highlanders. The Gordons suffered heavy casualties during the defense of the salient.

Pipe Major Meldrum was a prolific composer. Many of his tunes were published in the Logan Collection but not many are played today. The tune, “The Highland Heroes of Mons,” is a 2/4 march found in Book 8 of Logan’s Collection of Highland Bagpipe Music. The book was published around 1925 and was a War Memorial edition containing tunes written during or just after the war. 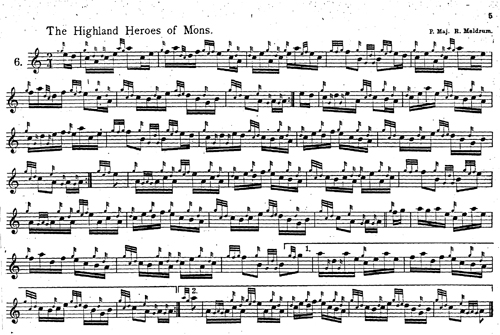 As published, the tune is four-parted with parts 1, 2, and 4 having repeats. There are no other published versions of this tune. The link below will take you to a resetting of the tune, including the a repeat of the third part.

0
2   0
previous Good Bagpipe Sound IS Moisture Control—PART II
next “How Do I Know When a Tune is 'Too Difficult'?”

The Battle of the Somme