The next tune in our continuing series of pipe tunes of the First World War is “The London Scottish Advance to Messines.” This tune marks a somewhat inconsequential battle, The Battle of Messines Ridge, but an important moment in the British war effort.

Fall of 1914 was not going well for the Allied forces in France. German forces had won a series of battles, the Battle of the Frontiers, driving deep into France. The German advance, starting on 14 August, 1914, was finally halted on 12 September with an Allied victory at the First Battle of the Marne. On September 13, 1914 the Allies launched a counter attack and started the Race to the Sea.

The Race to the Sea is the name of a series of engagements from mid-September to the end of October, 1914. Both the Allied and German armies tried a series of flanking maneuvers to the north to try and take the enemy forces on the side. While not technically a race to the North Sea, the reciprocal maneuvers only stopped when the British took the last area of open ground in Belgium next to the north sea.

Messines is located in the province of West Flanders, in Belgium. In the weeks leading up to the battle, the British 1st Cavalry Brigade was taking part in a general British advance in the area trying to push the Germans out of Flanders.

The 1st Cavalry Brigade was ordered to cross the river Lye near Deûlémont, south of Messines.  They encountered heavy German resistance during a series of skirmishes from 9 to 18 October. The 1st Cavalry took up a defensive position on Messines Ridge. Suseptable to a German attack, the British moved up several divisions to plug gaps in the region.

At 4:30 am on October 30, 1914 the Germans attacked. Six thousand German infantry advanced on Messines Ridge which was defended by only 900 cavalry. After five hours of bitter fighting, the 1st Calvary was forced to withdraw from the ridge. British reinforcements started to advance at noon on Messines to recapture the lost ground.

The London Scottish Regiment was created as a Volunteer Infantry Regiment, the London Scottish Rifle Volunteers, in 1860. Originally they were a group of Scots living in London and were sponsored by the Caledonian Society of London. With the reorganization of the British army in 1908 they became a Territorial force, the 14th (County of London) Battalion, London Regiment (London Scottish).

At the start of the First World War the London Scottish, now called the 1/14th London Scottish Regiment, were mobilized. They were send to France on September 15, 1914.

At the start of the war, Territorial Forces were looked down upon by the regular British Army regiments. Territorials were recruited to protect the home front and not meant to be sent overseas. Generally their equipment and training was not as good as the active duty. With the start of the war many of the Territorial Regiments volunteered for overseas duty. This is why, after being in France for a month, they were relegated to digging trenches.

At 3:00 am on the morning of October 29, the London Scottish Regiment was outside of Ypres, north of Messines, digging trenches. After a long, hard day and a march back to Ypres, they boarded 34 London Buses. They were sent to Armentières to support the 2nd Cavalry Division.  The morning of October 30 saw them digging more trenches. At 8:00 am they received orders to head for Messines.

When the London Scottish arrived at the ridge they were placed in a less than idea location. They were in an open position, with no cover, directly in the path of German attacks on the hill. The Germans soon attacked with a force that greatly outnumbered the defenders.

Over the course of the night and into the next day, the London Scottish fought back two waves of Germans. They were faced with numerous problems, mainly malfunctions of their rifles, which were an older design, and ammunition that would not work.

A third wave of Germans attacked and and broke through the London Scottish line cutting them off from reinforcements. The London Scottish suffered heavy losses, 394 of 700 men, and were ordered to fall back to avoid the destruction of the whole regiment. The much larger German attackers also suffered heavy losses and were unable to capitalize on the capture of the ridge.

In the following days, the British launched further attacks trying to reclaim the ridge but were unsuccessful. The time the London Scottish spent defending the ridge allowed the British to reinforce the line and prevent a German attack on Ypres.

The Battle of Messines Ridge was the first time a Territorial Force saw action in the First World War. Even though the London Scottish Regiment suffered heavy losses, they proved that Territorials could hold their own against the highly trained German Army.

The tune, “The London Scottish Advance to Messines,” was composed by Perry W. Scott. It is a three-parted 2/4 quickstep march and was published in book 8 of Logan’s Collection of Highland Bagpipe Music. The book was published around 1925 and was a War Memorial edition containing tunes written during or just after the war. Scott had 11 other tunes published in this book. 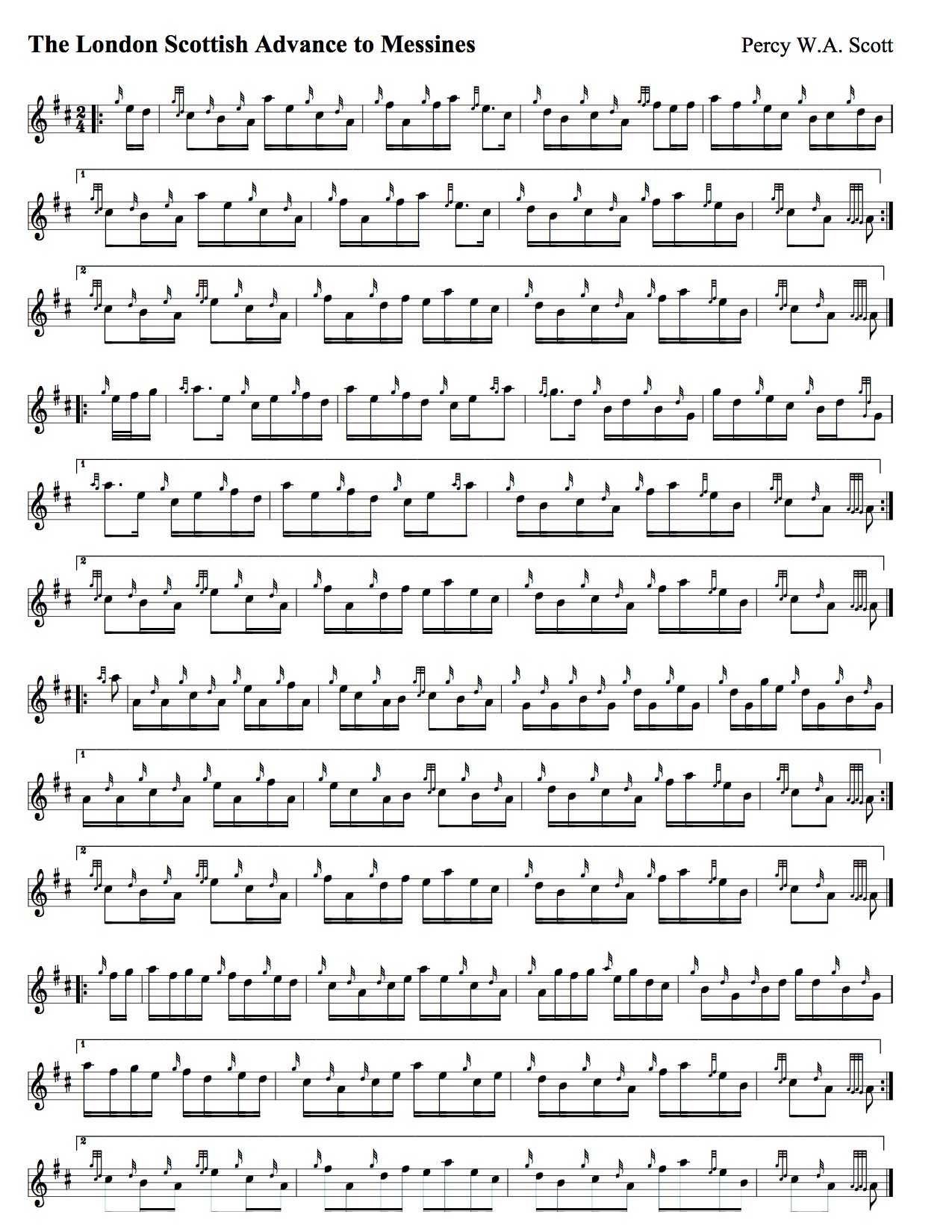 The Seven Heroes of Moeuvres