Home Media News & Blog "What Is a Crunluath?"

A crunluath is a movement of embellishment that is found in most piobaireachd.

It can be played from all the notes on the chanter and will always end on an E. The term crunluath can also be used to describe a section or variation in a piobaireachd.

The crunluath movement is written as:

It will most commonly be abbreviated in a piobaireachd score as:

The note above the “C” is the note that the movement starts from.

A crunluath is played in 5 steps. The first 3 steps are the same as a taorluath.

This image shows the steps of a crunluath: 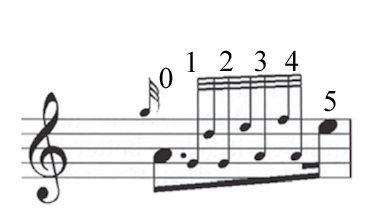