Home Media Frequently Asked Questions "What Is a 'Dotted' Note All About?"

Do you recall the frustration, as a beginner piper, being told to play the music as it is written, but then told to “hold” certain notes longer than others? It takes some time and experience to understand and to appreciate that the music for the bagpipes is not often “played as written”, especially when the music involves “dotted and cut” notes. It's important to understand what this really means if you expect to get more musicality out of your playing.

Let’s start with a quick review, just to get oriented. We know that a quarter note is the basis for western music. In a bar (or measure) of a 4/4 march, for example, there are four beats, with a quarter note getting the beat. See Figure 1, which is the first phrase of a simple 4/4 march titled “Coulter’s Candy”.

Obviously, when two eighth notes together have the same value, also known as being "round”, as in this example, they both are played for the same duration. However, when one of the eighth notes is “dotted”, and the following note is a shorter 1/16 note, you have what is known as a “dot-cut” rhythm. See Figure 2, which is a simplified version of bar 1 of the famous strathspey “The Caledonian Society of London”.

The first three beats are in a dot-cut rhythm, but the fourth beat is a “cut-dot” rhythm because a cut note precedes the dotted note.

Music theory tells us that the presence of a “dot” adds one half of the note value to the note, increasing its duration. Thus, a dotted 1/8 note now contains an additional 1/16 note value. As such, the dotted note is played longer than an eighth note, but not as long as a quarter note. In terms of mathematics, a dotted eighth note followed by a sixteenth note are in a ratio of 3 to 1, or 75% to 25%. In other words, the dotted note is played for 75% of the beat, and the cut note is played for 25% of that beat. But who in the world thinks like this while playing? The answer lies in Figure 3. 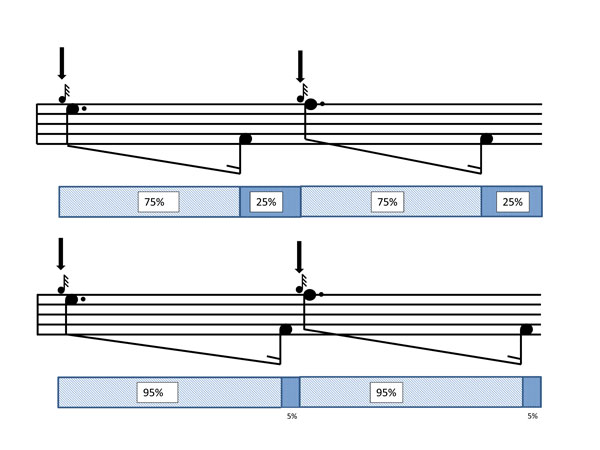 In Figure 3, the first two beats of bar 1 from the strathspey are shown, along with arrows to indicate where each beat begins. Below the staff can also be seen a timeline showing the 75% and 25% proportions of a beat that a typical “dot-cut” rhythm is played. Thus, the E is played for 75% of the beat, and the Low A is played for the remaining 25% of that beat. The G gracenote to F begins the second beat, and so forth.

In the real world of bagpipes, however, with our inability to alter our musical dynamics by changing the volume of our pipes, we must create an “illusion” of increased dynamics by increasing the contrast even more between adjoining notes. We do that by playing dotted notes longer than “written”, and shorter notes “shorter” than written. The lower image in Figure 2 illustrates this concept. But instead of focusing on how “long” to play a dotted note, we play it "as long as musically possible" (ALAP). We can then make the cut note shorter. The question then becomes “how much to cut?” The answer is to play the cut note "as short as musically possible (ASAP). This concept means that the cut note must be clearly played and audible, but its duration is now so brief that the note is played only an instant before the next beat or, in this example, the next dotted note. Here, the Low A is played a tiny fraction of a second before the G gracenote to F, which is the next beat. This writer has arbitrarily assigned a note value here of 5%, just to show that the two Low A’s are no longer played as true sixteenth notes. By playing our dotted notes ALAP and our cut notes ASAP, and perfectly landing on the following beat, we no longer need to think about or worry about how long to hold a dotted note. We simply give the dotted note its necessary value.

A piper with excellent control can alter the size of "dotted" notes and “cut” notes. The idioms requiring the most contrast between dot and cut notes are 2/4 marches and strathspeys. Modern jigs are played with a more “round” rhythm than jigs played in the past, but they usually retain an increased emphasis on the first note of a beat. Reels may have a dot cut rhythm, but the “cut” notes are “softened” a bit, with much less contrast than in a strathspey.

In summary, a dotted note theoretically increases that note's value by one half. But in piping, we go beyond that theory by lengthening the dotted notes and shortening even further the cut notes. As a result, instead of trying to interpret what our Pipe Major means by “Hold that dotted note!” we can focus our attention on extending those dotted notes as long as possible and thus making the cut note as short as possible, maintaining its clarity and generating musical dynamics in the process.