Why You Should Care about the "Pitch-Time" Continuum

Why You Should Care about the "Pitch-Time" Continuum

Do you know pipers who take their pipes out of the bag, put the drones together, and start playing without taking any time to “warm” them up? Unfortunately, the resulting sound is enough to make anyone dislike the sound of the pipes. But even if we play the pipes for a few minutes before tuning, how many of us have a deep understanding of reasons behind warming up?

When the pipes are first picked up to play, all of its parts are at ambient temperature, whether indoors or out (hopefully not in direct sunlight!). These parts include all reeds, drones, chanter, pipe bag, and the internal environment of the bag itself. Further, the temperature of our exhaled breath is at our core body temperature (typically 98.6 degrees Fahrenheit or 37 degrees Celsius). See Figure 1 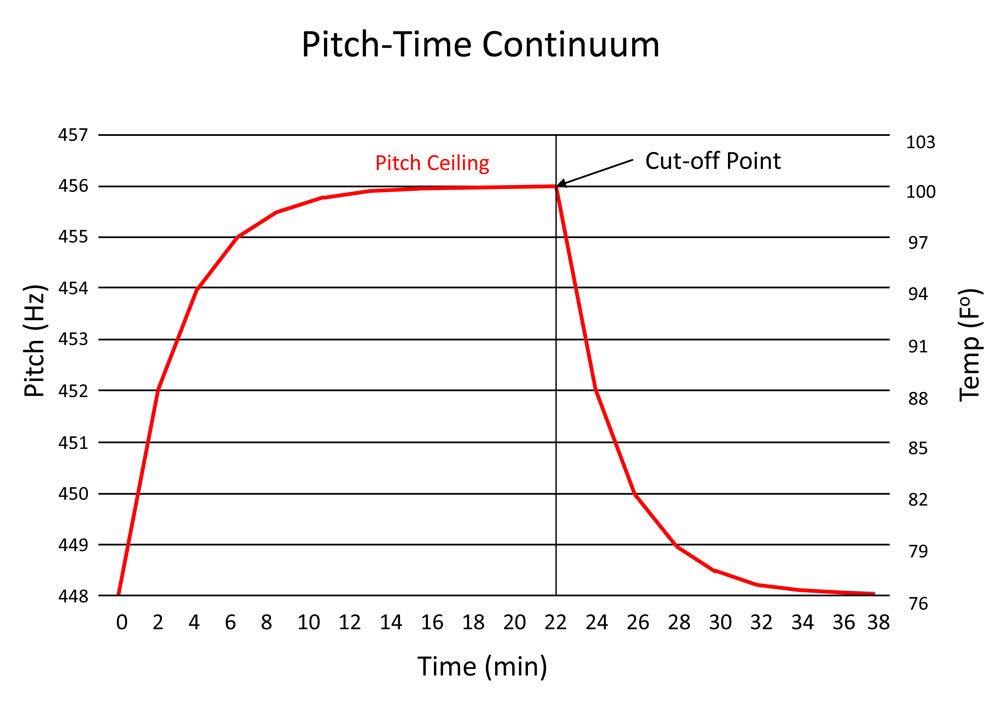 Figure 1 represents conceptually how the chanter reed's pitch changes over time as the temperature inside the bag rises in response to the warm air from our breath. The pitch increases because the temperature rise causes the reed’s fibers and molecules to vibrate more quickly as they are warmed. This change in pitch is rapid at first, because of the big difference between ambient temperature and that of the exhaled breath. However, over the period of a few minutes, the reed’s pitch will approach a plateau, where playing for a longer time will have little, if any, effect on further increase in pitch. What happens when one stops playing? Again, referring to Figure 1, it is clear that the pitch of the reed immediately starts to decrease in somewhat of a mirror image of the rapid increase when beginning to blow. This drop in pitch also plateaus because the longer the pipes are not played, the temperature of the chanter reed again approaches the ambient temperature.

But heat is only one of several factors that affect the chanter reed’s pitch. As we all know, in addition to heat, our breath also contains moisture, along with a variety of gasses and metabolic byproducts. As it leaves the lungs, exhaled breath initially has a humidity of 100 percent. This means that at body temperature, the air in our lungs is completely saturated with water vapor. One can observe this moisture as it condenses on a cold day to look like fog coming from our lungs. Figure 2 shows how moisture flattens the chanter reed pitch, compared to a “dry” reed. The decrease in pitch due to moisture occurs because the reed becomes “heavier” compared to a dry reed. At first glance, one might assume that a flatter pitch from the moisture is somehow “unwanted”, but in fact, moisture greatly increases the reed’s flexibility and increases the variety and richness of the harmonics coming from the reed. Lastly, moisture inside the pipe bag decreases the differential between “warmed up vs. cold pipes”, which is also a good thing. Thus, the decrease in pitch after a cut-off is not as dramatic in the presence of moisture. 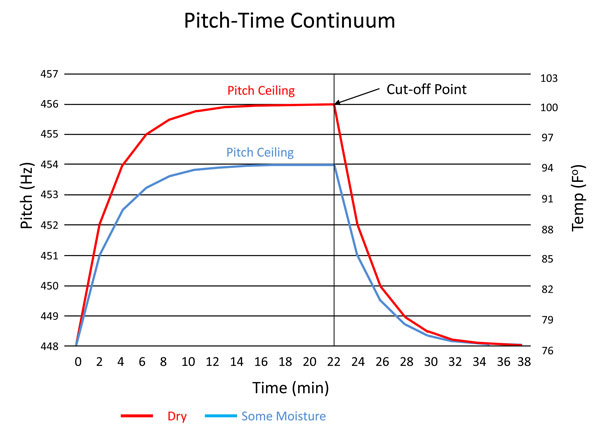 Figure 3. shows the effect of blowing for a longer period of time, with the result of even more moisture introduced into the bag. Moisture, up to a point, stabilizes the chanter reed and makes it easier to tune. 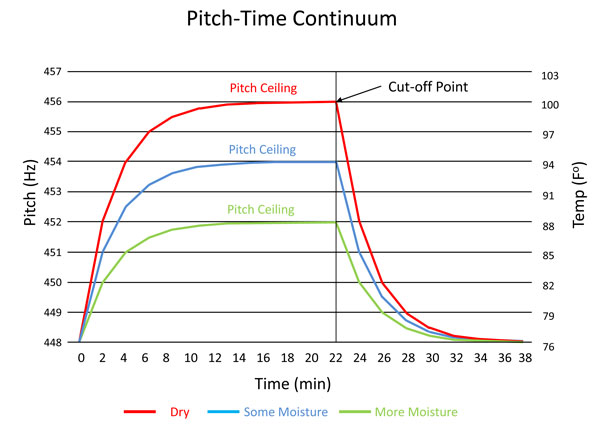 A dry chanter reed, such as when the pipes are first picked up, is unstable and impossible to tune. The longer the pipes are played, the greater amount of moisture that will be introduced into the bag. Thus, pipers must be constantly aware of and continuously adjust tuning in response to this changing environment. Other factors come into play as well. The type of pipe bag, its seasoning, and drying systems all have an impact on managing this cycle.

Obviously, we can’t very well tune drones to a chanter reed that is constantly increasing in pitch. So, we have to be patient, play for a while, and wait until the chanter reed has approached its plateau as illustrated by the above graphs. But now that we know the physical changes that a chanter reed undergoes in the short term, how many of us are still reluctant to fine tune during our practice session or during a performance? The top pipers tune their drones rather continuously, often at the end of only two or three tunes, so all of us should also take that approach.

Better understanding of the changes that occur with the chanter reed’s pitch over time, the “pitch-time continuum” will help to make us all better pipers. As a result, we will achieve a far better sound and greater satisfaction as we play. Besides, your audience will certainly appreciate your efforts.

How Your Bagpipe Changes as You Play
What Is the Graduated Tuning Effect?
Pipe Band Tone With Robert Mathieson

Pearls of Wisdom from Robert Mathieson

"How Do I Care for a Chanter Reed?"

"Which Reeds are Right for My Bagpipes?"